"THE TIME OF THE GUITAR" The Third International Composer Competition 2022, Moscow 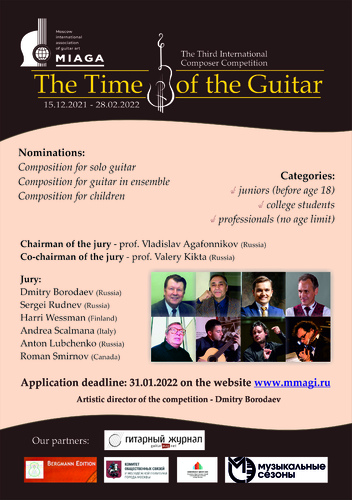 Jury of the Competition:

Works of the contest winners will be published by the publishing house "Bergmann Edition" (Denmark).

The works that received the highest rating of the jury will be included in the mandatory program of the II international competition-festival of classical guitar performers "The Time of the Guitar" in October 2022 in Moscow.

According to the results of the contest will be held an international videoconference with participation of the members of the jury “Moscow-Helsinki-Toronto”.

Artistic director of the competition —
laureate of the Moscow Government prize,
president of the Moscow International Association of Guitar Art
Dmitry Borodaev